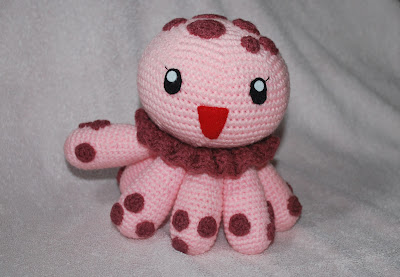 I finally have a new pattern to share with you guys! This is Clara from Princess Jellyfish. I saw a plush of her at a convention a few weekends ago and really wanted to try making her. This is the result. She kind of looks more like an octopus than a jellyfish >.>

She's about 7-8 inches tall. I really don't want to go down a hook size, but it seems like I might have to soon. Need to make myself crochet tighter!

Materials needed:
Hook size of your preference. I used a G hook
Yarn in a dark and light pink
White, Black, and Red felt
Black embroidery floss
Materials for attaching felt (either embroidery floss or some form of glue)
Tapestry Needle

Spots:
I used a combination of these spots. Use however many you want. On mine there are 2-3 spots on each tentacle and 6 spots on the head.

Face Details:
-For the eyes I made ovals about 3 rows tall with the black felt.
-The white pupils are about a row tall.
- The mouth is 4 rows tall. I basically cut out a narrow red triangle and curved out the tip.
-Attach the eyes and mouth onto the face however you would like. Embroider on the eyelashes with black embroidery floss.

Attachment:
-Use tails to sew spots onto the bottom of each tentacle and on top of the head. (Optional: Stick residential copper electrical wiring into the body and a tentacle, and sew the leg on. This allows you to pose the amigurumi. Here is a good tutorial for this. http://www.youtube.com/watch?v=LBBfZZj5cp8&feature=player_embedded#!)
-Use tails to sew tentacles to the bottom of the body. I did 3 tentacles in the front, 3 tentacles in the back, and 1 tentacle on each side.

If you have any questions, feel free to ask!

This pattern is for personal use only. Please do not sell finished products from this pattern without my permission. Thanks!