I'm so amazed by the response this little bear has gotten. Thanks so much for your support. I love seeing and hearing about your little bears ^^


I thought I would do everyone a favor and update this pattern to make it easier for you to count stitches and attach each part of the bear together. Don't worry! There aren't any major changes. The head is just now closed, and I've given a few minor directions for where to attach everything. Hope this helps you all! 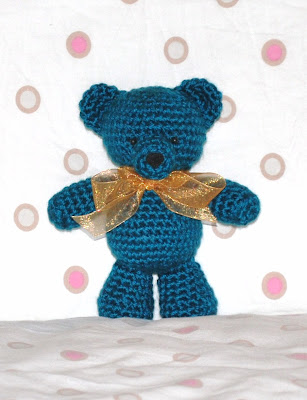 MATERIALS
Hook size: E
Recommended Yarn: Red Heart Super Saver SOFT
Note: This will give you a bear that is about 5-6 inches tall. You can increase your hook size to G and use regular red heart super saver solids to give you a bear that will be maybe 7-9 inches tall.
Small bits of black felt for the nose
4.5 mm Safety eyes or in a size of your preference
Hot glue gun


Unless otherwise stated, repeat the instructions until the end of the round.


Attachment:
1 Cut a triangle out of felt. Curve in corners, and use your hot glue gun to glue it onto the muzzle for a nose.
2 Sew the head to the body.
3. Sew on the ears (on the side 4-5 rounds down), arms (on the side 1 round below the seam between the head and body) and legs (They are only 1 round apart).
4. OPTIONAL: Tie ribbon around neck.


I hope the changes help everyone! I made another bear using the new changes below. Pretty much the same right? If you need any help, just leave a comment. ^^


Please do not sell this pattern or any product made by this pattern without my permission.
Because of recent events, please email me at hanakoheals@yahoo.com with a picture of the finished product if you would like to sell products made from my patterns. Thanks for understanding.